It was one of those days. Coupled with the fact that there was also a--let’s just say--“vintage” whole chicken at the back of the freezer that needed to go. Plus, I was just hankering for some really comforting, lifeforce, restorative chicken broth. I don’t make chicken soup that often. Mostly because I’m far too impatient in the kitchen to make it taste the way I want it to taste. Until I used my pressure cooker. Life changer.

This was still a few more steps than my typical “fix and forget” type of recipe. I couldn’t believe how great the meat came out, even though it had been frozen for an embarrassing amount of time.

The beauty of this simple dish is that you can get enough meat off your bird to use it for an additional dish or two. Tomorrow, I’ll be adding some more broth and meat to the leftovers from today’s soup, and I’ll be making some mayo to whip up some chicken salad. Yum!

I call it “vintage” chicken soup--for two reasons this time--because I try to make it taste just like the chicken soup my childhood babysitter used to make. I was too little to know to ask her what she put in it, but there was something about it that really stuck with me. Much to my surprise the secret ingredient she used was an herb I loathed for most of my life. Dill.

I didn’t really get this recipe right until many years ago when I was just learning how to cook. I had very few spices and out of desperation, I chucked some dill that my roommate had into a batch of my soup. It was like a light bulb went off. How could it be? Surely, I didn’t like dill. Turns out, it was fresh dill that I didn’t really care for, but I’ve since come to love it just as much as I love this soup. You can really use whatever you have on hand for the vegetables, but I wouldn’t omit the dill or lemon. Enjoy.

Defrost, rinse and pat dry one whole chicken or stewing hen. Season with your favorite spices. Here I used dill, paprika, italian seasoning, garlic powder, coriander, salt and pepper. Place your chicken in the pressure cooker, breast side down. 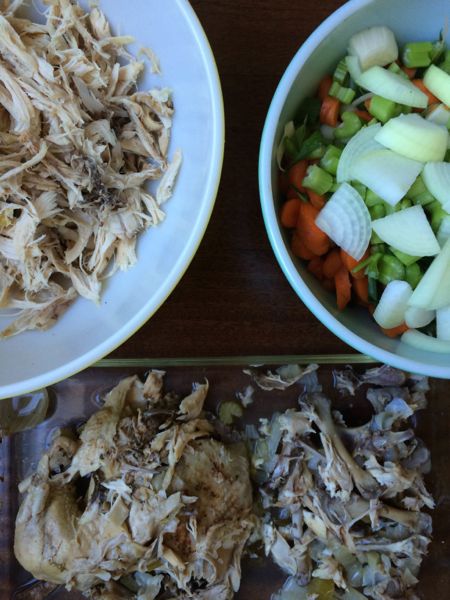 Chop a total of four cups of veg to make a sort of mirepoix. I used celery, fennel, brown onion, three dried crimini mushrooms, and a head of garlic left whole. I also add one lemon, sliced.  Once chopped, add to the pressure cooker around your chicken. Add enough water to cover almost the whole chicken, or up to your max fill line. Pressure cook on high for 50 minutes. I strain and sift the veg mix after the meat is done cooking and the broth is made. I incorporate some of it back to the final soup to add texture and some of that great garlic flavor, after pressing it through a sieve. 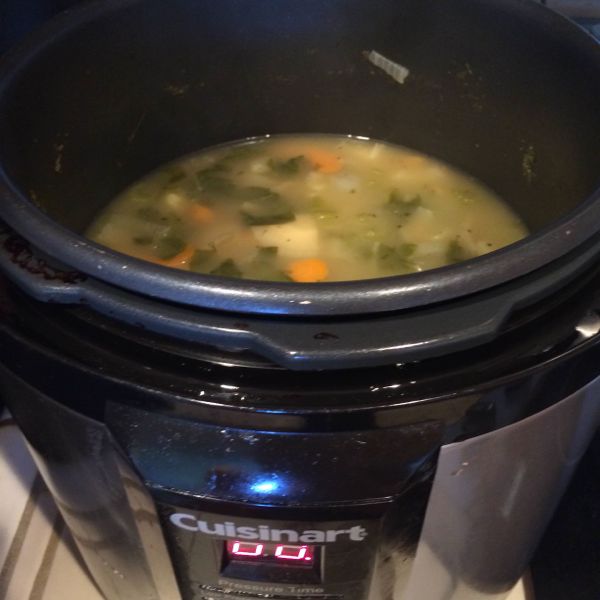 When the chicken is done, remove it to a shallow baking dish and let cool while you strain and sieve the vegetables from your broth. Return the broth to the pressure cooker and set aside your soft cooked vegetables in a bowl.

Chop some fresh vegetables that you’d like to have in your soup. Here I used carrots, celery, green onion, fennel, brown onion and rainbow chard. I probably added about 6 cups of veg back to the broth in the pressure cooker. You can add whatever you like and adjust the amount to your liking. Add a couple more cups of water to your pot. Sprinkle with fresh dill, salt, pepper and maybe some more of the spices you used on your chicken. Add half a lemon sliced and the juice of the other half of the lemon. Cover and cook on low pressure for 15-20 minutes.

This second step is annoying, but it gives you a soup with some less mushy vegetables that ends up feeling a lot more fresh and satisfying. While the vegetables are cooking, remove your chicken from the bones, shredding it as you go into a separate bowl. Be extra careful to watch out for the tiny bones of the wings and the vertebrae! I have a serious chicken bone-choking phobia.

Once the vegetables are done cooking, add as much chicken as you like to your soup. Add the sieved vegetables you set aside. Test the seasoning for salt and pepper. Freshen the whole thing up with another squeeze of lemon, a handful of fresh dill, and maybe some fresh green onion. Serve and enjoy all the warm and fuzzy vintage feelings. 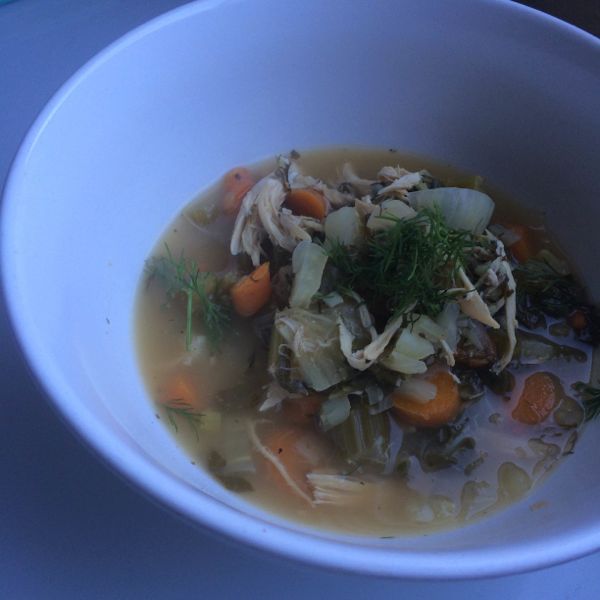