Causes for concern are both an overgrowth of microorganisms that are normally present in the intestines and the presence of microorganisms that are not normally present in the intestines. Either condition signals that major physiological pathways in the intestinal environment are outside homeostatic limits. Some of the immediate consequences can include adverse alterations in pH, digestion, and absorption. These factors set the stage for further deviations from health, including the retention and proliferation of microorganisms that would be maintained ordinarily at a lower concentration, or would be rapidly expelled. Such conditions can produce anatomic disruption of the intestinal mucosa resulting from the physical infestation of the microorganism, and chemical insult and physiological upset of the mucosa caused by adverse reactions to the metabolic products of the invader. Maldigestion and malabsorption of nutrients can produce longer-term dysfunction of the host. This condition can persist subclinically for years, even decades. By the time signs and symptoms become evident, the patient might be suffering severe and extensive underlying pathophysiology.

Even more ominous than a primary infestation is the tendency of invading microorganisms to metamorphosize into various stages, and to migrate to tissues and organs sometimes distant from the gastrointestinal tract. Such stages, including cysts, can remain dormant within tissues, and can be extremely difficult to detect. Discouragingly, the level of difficulty of detection is often directly proportional to the level of difficulty of treatment. These factors underscore the importance of maintaining constant vigilance in controlling the intestinal environment.

Secondary infections, often involving so-called "opportunistic" organisms, can provide evidence of a more deeply rooted, insidious process. One such organism is the yeast Candida albicans, which is implicated in a variety of disorders and has a predilection for virtually any mucous membrane. Often innocuously present in small amounts, it is important not only to control its concentration, but also to correct the causes and the effects of its proliferation. 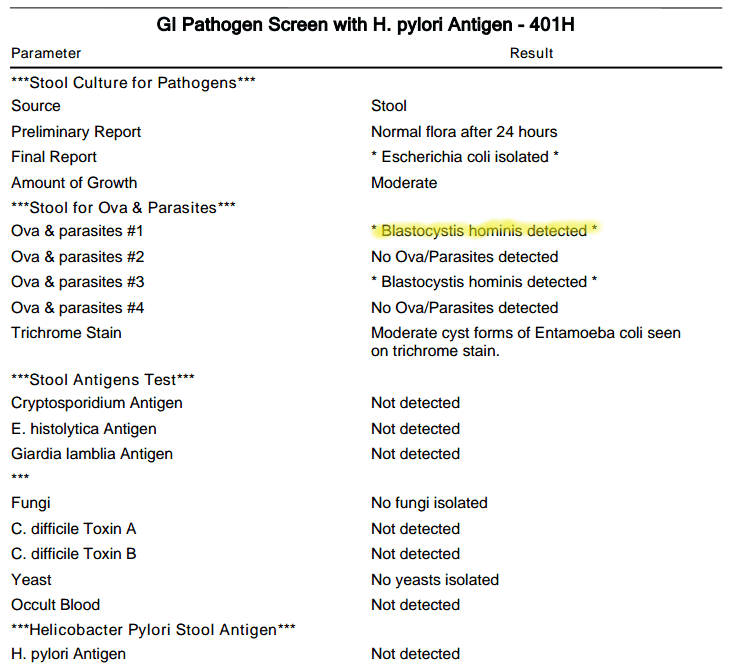 Several methods can be used to detect intestinal microflora. Direct microscopic examination can reveal the ova and mature forms of parasites; immunological analysis can detect active immunoglobulins to pathogens; chemical analysis can reveal the presence of toxins and occult blood. All three methods are used in the GI Pathogen Screen (BHD #401). Varying fecal transit times and the natural cycling of parasites through their successive stages mandate a sufficiently large group of samples to provide a representative profile; samples are generally taken over four days. However, if a patient has slow transit/retention times, sampling every other or every third day may increase recovery rate.

Optimal intestinal health is a prerequisite for most body physiology. The functions of digestion and absorption are so fundamental to the maintenance of homeostasis in metabolism that every physiological process is ultimately dependent upon digestive function and process. Suboptimal digestive function can be either a basic cause of or a substantial contributor to a variety of disorders, some of which may have seemingly little or no obvious clinical correlation to intestinal physiology. This reliable intestinal microflora screen documents parasitic and pathogenic involvement that can interfere with normal gastrointestinal function and develop into a pathological condition.