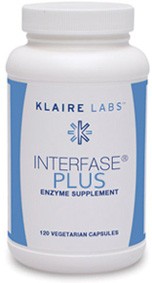 InterFase Plus by Klaire Labs offers the same proprietary enzyme formulation as the original InterFase product with the addition of ethylenediaminetetraacetic acid (EDTA).

Biofilm is made up of microorganisms that are encased within a matrix of exopolysaccharides and exoproteins. This matrix adheres to other surfaces, resisting dislodgement. The microorganisms encased in these biofilms are highly resistant to antibiotics and other antimicrobials. They are also resistant to the bacteriocins that are produced by probiotics. InterFase was specifically designed to disrupt the biofilm matrix that can embed gastrointestinal pathogens.

The specific enzymes chosen for InterFase and InterFase Plus were selected because they can rupture the extracellular polymers that are often found in biofilm. These enzymes can also degrade the cell walls of bacteria and yeasts. Klaire Labs tested these enzymes in vitro for their antibiofilm activity and found that they were able to cause meaningful degradation of biofilm communities that consisted of pathogenic bacteria and yeast.

Calcium, magnesium and iron are essential for biofilm creation. The EDTA included in InterFase Plus binds the metals necessary for biofilm formation.