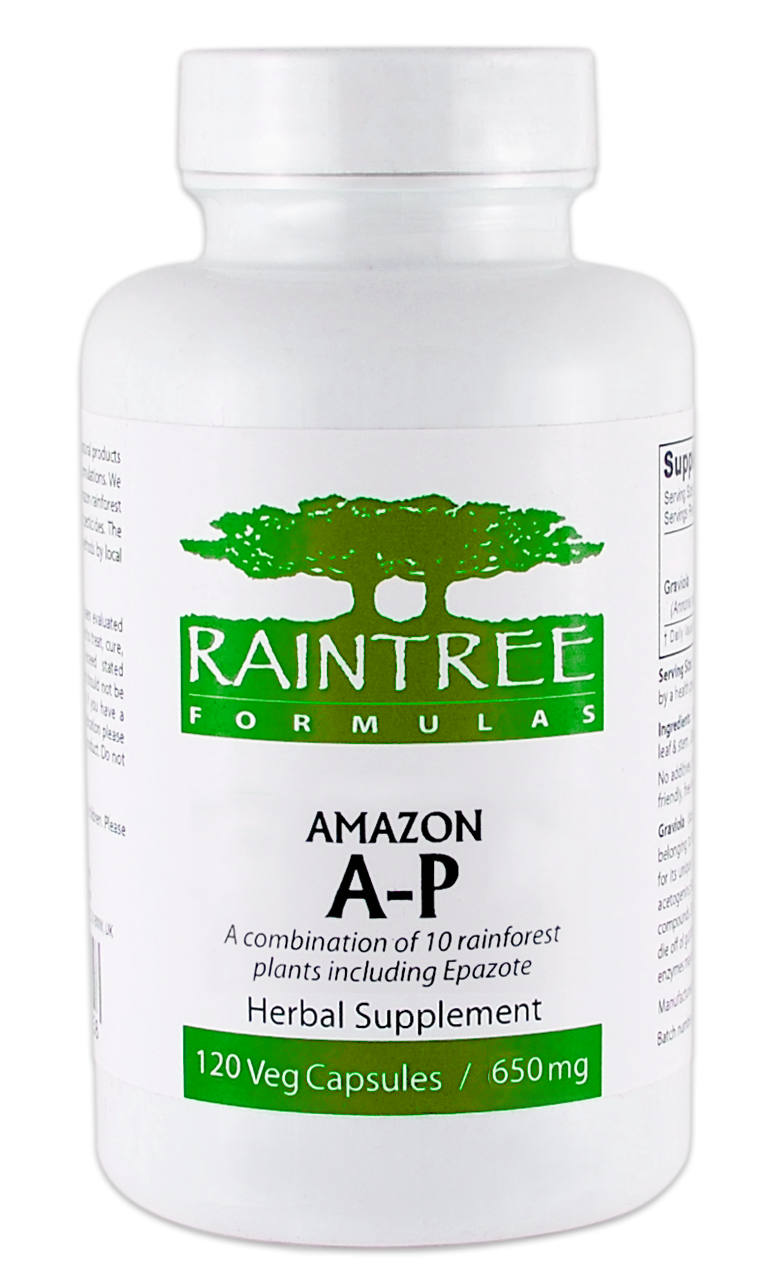 This formula contains 10 rainforest herbs and plants which are indigenous to the Amazon Rainforest. Amazon A-P Antiparasitic contains Amargo, Simarouba, Boldo, Fedegoso, Carqueja, Quinine, Erva Tostao, Epazote, Anamu and Graviola, all of which are used as antiparasitics in traditional medicine.

The ingredients were carefully selected based on their preference by indigenous peoples to kill parasites, particularly those that enter the body through the bite of an infected mosquito. Of these, Quinine is the most well-known and has been used for years as a tonic to prevent malaria. It's believed to interfere with the reproduction of parasites in the blood.

To support the anti-parasitic effects of these herbs, many also kill insects, lice, bacteria, amebas and viruses and expel worms for a whole-body cleanse of harmful organisms. The herbs in Raintree’s A-P formula have been used traditionally to treat not only parasites and worms but also treat common conditions, many of which may be due to an unknown cases of intestinal parasites. This includes diarrhea, poor digestion and a host of mystery illnesses, in which modern medicine can sometimes fall short of pinpointing the cause as parasites in the body.

Simarouba and Boldo were chosen for their synergistic action in combination with the other herbal ingredients, and their use to stimulate digestion and appetite. Many ingredients, most notably Carqueja and Fedegoso, detoxify and support the liver for improved overall health and to aid in the expulsion of parasites and other harmful organisms.

These ten 100% natural herbs from the rainforest have been used by generations to treat common ailments. Each Raintree Amazon A-P capsule contains 650 mg of natural herbal ingredients wildcrafted  by Rainforest locals and sourced by us through fair trade.

The ten ingredients in Amazon A-P Antiparasitic were chosen for their long history of use by medicinal and shamanic healers of the indigenous people of the rainforest. Many of these ingredients were made into a tea, while others were turned into a leaf decoction, which is a means of extraction through boiling the plant material. In some cases, the berries of the plants were eaten raw to expel worms or overcome parasitic invasions, diarrhea or aid poor digestion. These herbs have been used by Brazilian, Peruvian and Bolivian healers but now have slowly made their way to becoming popular internationally. However, no other product on the market combines them into one synergistic formula like Raintree’s Amazon A-P.  3 capsules 2 times a day or as directed by a health professional.

Many of the individual ingredients in Amazon A-P Antiparasitic, most notably Graviola, may be made into a tea or mixed with another liquid. This supplement, however, combines the most potent anti-parasitic herbal remedies into capsule form to combat parasites, expel worms, support liver health and the immune system and aid in the recovery of diarrhea and digestion issues. This formula is most effective if taken on an empty stomach and consecutively for a minimum of 40 days, but the dosage should not exceed 9 capsules daily. Supplementing with probiotics will aid in the survival of gut flora.

Recommended Daily Intake: 3 capsules 2 times a day or as directed by a health professional.

Suitable for Vegetarians and Vegans. Free from yeast, soy, wheat, nuts and dairy.

Cautions: This supplement should not be taken if you are pregnant or trying to become pregnant. Use caution and consult with a healthcare provider if you have a heart condition, including low blood pressure.

This product is made 100% to Raintree Nutrition specifications.