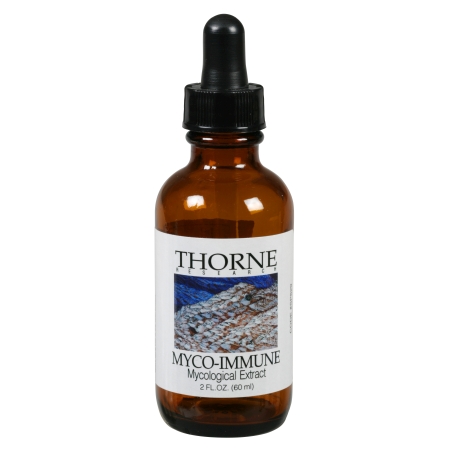 Mushrooms have been used medicinally by many cultures for thousands of years. Proteoglycans and polysaccharides, including alpha-glucans and beta-glucans, are believed to be the active ingredients in many of these mushroom species. The seven mushrooms in Myco-Immune are the best-researched mushrooms known and have been shown in numerous studies to be potent immune-enhancers.

Research demonstrates the mushrooms in Myco-Immune increase macrophage and NK-cell activity, phagocytosis, and interferon-gamma and interleukin-1 and -2 production, all of which promote good immune health. Cordyceps, reishi, maitake, Schizophyllum, and Tremella stimulate B-lymphocytes and T-lymphocytes, and Cordyceps, shiitake, and Coriolus possess activity against harmful microorganisms.

Other Ingredients: 20-30% alcohol by volume.