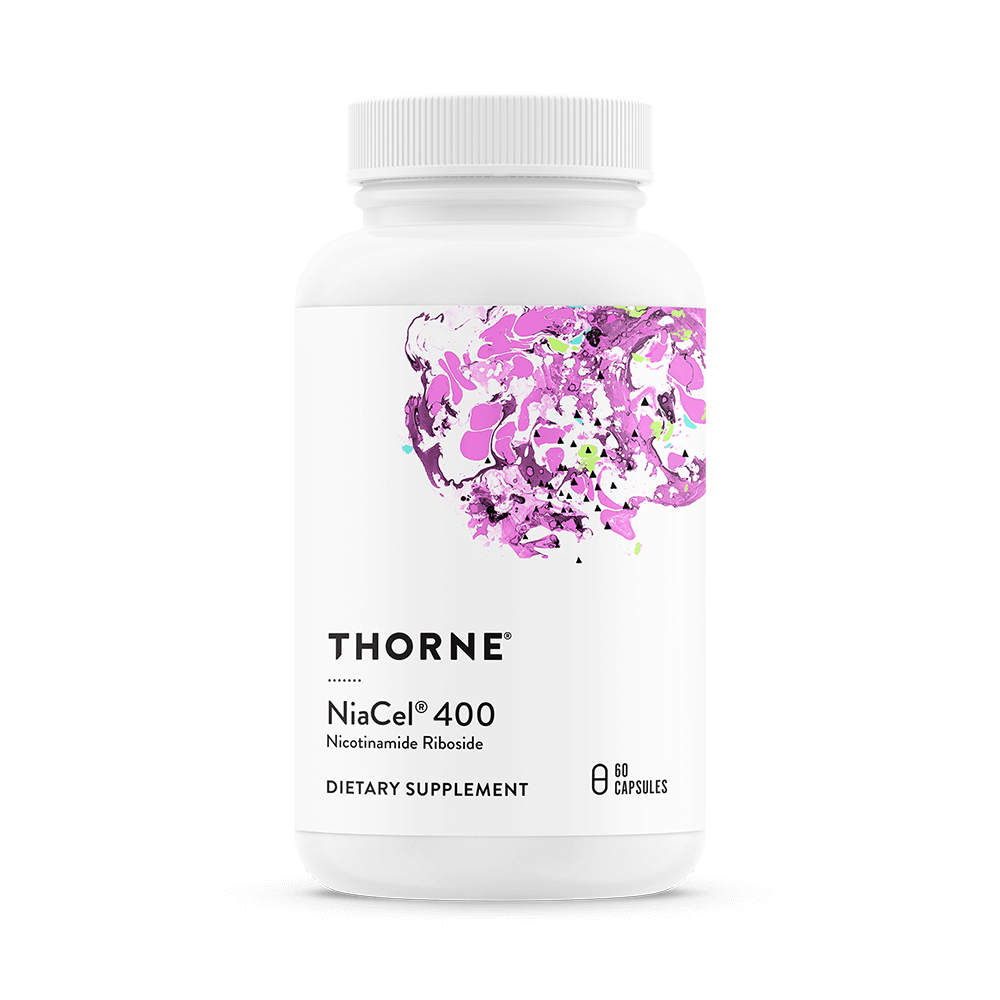 Lack of sleep, being stuck at a desk, too many late nights, over-exposure to the sun, and an unbalanced diet – each of these components of our modern lifestyle affects your body at the cellular level, leading to depletion of the important coenzyme, NAD+, and the resulting symptoms of early aging. Along with the effects of life’s daily stressors, the natural aging process causes your NAD+ level to decline. A decreased level of NAD+ slows down integral body functions, resulting in reduced vitality and early aging.*

With NiaCel, you can make age feel like just a number. By adding Thorne’s NiaCel 400, with Nicotinamide Riboside (NR), to your daily wellness routine, you can boost your body’s level of NAD+, helping defend your body against the effects of early aging and optimizing your daily vitality.* The added support for NAD+ in NiaCel 400 is ideal for athletes, as well as those individuals with conditions that require more robust support for NAD+ levels.*

Everyday Benefits of NiaCel 400:
NiaCel is great for more than healthy aging. Supplementing your healthy lifestyle with NiaCel 400 can also provide the following daily benefits:

Long-Term Benefits of NiaCel 400:
Although nothing can truly stop the process of aging, NiaCel 400’s ability to increase the body’s level of NAD+ and increase methylation is an excellent way to support healthy aging – supporting your long-term health and fitness goals by:

What is NAD+?
NAD+ – nicotinamide adenine dinucleotide – is a coenzyme found in every cell. Think of NAD+ as fuel for the cellular gas tank. As a key coenzyme, NAD+ plays an integral role in your daily and long-term health goals. The everyday level of your cellular energy production, as well as the regulation of your sleep-wake cycle, are beneficially influenced by NAD+.* Healthy levels of cellular energy and a proper sleep rhythm help maintain the pep in your step and a clear head.

Because an athlete needs to know that his or her supplements are trustworthy and compliant, every batch of an NSF Certified for Sport® product is tested for compliance with label claims and to ensure the absence of more than 200 substances banned by many major athletic organizations, including stimulants, narcotics, steroids, diuretics, beta-2 agonists, and masking agents.

Cellular aging is associated with NAD+ depletion via a number of mechanisms. The effect of aging on NAD+ levels and metabolism has been tested in an animal model in which the researchers demonstrated a significant decrease in NAD+ and NAD+:NADH ratios by middle age (12 months in rats) in the heart, lung, liver, and kidneys. This status was associated with increased levels of oxidative stress and decreased SIRT1 activity. The study’s authors concluded that, “Strategies targeted toward maintaining adequate NAD+ content during the aging process may prove a novel and potentially effective mechanism for retarding oxidative stress mediated cell degeneration and age associated disorders.”11 Calorie restriction is known to afford significant increases in human lifespan, in part via up-regulation of sirtuins. Resveratrol, one of the most-researched sirtuin activators, up-regulates human SIRT1 and has been shown to extend the lifespan in some organisms. In a seminal study, nicotinamide riboside elevated NAD+ levels, up-regulated sirtuin activity, and extended lifespan in a yeast model.10 Building on this study using a yeast model, researchers at the University of California Davis found that calorie restriction-associated increases in lifespan and stress resistance were dependent on adequate amounts of endogenous nicotinamide riboside.12 Mitochondrial dysfunction, which can manifest as a decrease in number or function of mitochondria, is a hallmark of aging. In a mouse study, increasing NAD+ levels for one week in a 22-month-old mouse resulted in mitochondrial function and muscle biochemical markers being restored to that of a six-month-old mouse.13

In a clinical study examining human pelvic tissue that had been surgically removed for reasons unrelated to the trial, declining NAD+ levels were associated with aging in both males and females. This was shown to be at least partially due to increased PARP activity (more evident in males than females), which is necessary for DNA repair. NAD+ is the sole substrate for PARP and is consumed when PARP is involved with DNA repair. This study also found SIRT1 activity was negatively correlated with increasing age in males, but not females. The authors concluded that NAD+ depletion probably plays a role in the aging process by interfering with DNA repair, gene signaling, and energy production.14

Progressive axon degeneration (Wallerian degeneration) takes place in a number of neurodegenerative diseases, including peripheral neuropathy, Parkinson’s disease, and Alzheimer’s disease. Researchers at Washington University School of Medicine in St. Louis, Missouri, discovered that NAD+ pretreatment of injured axons – either from physical injury or chemotherapy-induced (vincristine) injury – protected against further nerve degeneration via SIRT1 up-regulation.15 Further research demonstrated exogenous application of NAD+ at the time of axon injury prevented degeneration.16 Some of these same researchers sought to determine whether NAD+ precursors could provide protection from neurodegeneration. In an elaborate set of experiments, niacin, niacinamide, nicotinamide riboside, and several intermediate molecules in the biosynthetic pathway to NAD+ were tested. Nicotinamide riboside was the only dietary constituent of the NAD+ pathway that provided axon protection; no protection was offered by niacin or niacinamide. Furthermore, the enzyme Nrk2 that converts NR to nicotinamide mononucleotide (which is then converted to NAD+) was increased 20-fold after neuronal injury, indicating NR’s significance in this process.17 Optic neuritis is an inflammation of the myelin sheath of the axons that make up the optic nerve and is often associated with multiple sclerosis (MS). Symptoms include vision loss, fading color vision, and pain; and a histological sign is loss of retinal ganglion cells. In an experimental MS murine model, intravitreal injections of either nicotinamide riboside or resveratrol helped prevent loss of retinal ganglion cells, most likely via SIRT1 activation, since the effect was blocked by a SIRT1 inhibitor. Further research is needed to determine whether oral administration would offer the same protection. The authors suggest these findings help confirm that, “SIRT1 activation is important for neuroprotection in CNS [central nervous system] demyelinating disease.”18 NAD+ depletion might be central to brain damage associated with ischemic stroke or traumatic brain injury. The proposed mechanism is the up-regulation of PARP in order to repair DNA. PARP is a NAD+ consumer, however, so if the area is flooded with PARP, then a relative NAD+ deficiency could occur.19 In an animal model of traumatic brain injury, intranasal NAD+ protected hippocampal neurons from destruction.20 It remains to be determined whether oral administration of nicotinamide riboside can provide such neuroprotection.

Recent research has implicated dysregulation of the sirtuin pathway in the pathogenesis of Alzheimer’s disease (AD). In mouse models, the up-regulation of SIRT1 and increased NAD+ have been shown to prevent amyloid-beta (Aβ) accumulation, the primary components of amyloid plaques found in the brains of individuals with AD.21,22 The effect of dietary nicotinamide riboside was tested in an AD mouse model. Mice supplemented with 250 mg/kg/day NR for three months demonstrated a diminution of cognitive deterioration. Amyloid-beta production was attenuated by NR via up-regulation of peroxisome proliferator-activated receptor-γ coactivator 1α (PGC-1α), an important regulator of Aβ generation. The authors concluded, “Our study provides a novel aspect of a potential application of NR in AD treatment.”23

In a just-completed study in a mouse model of mitochondrial myopathy (demonstrating the abnormalities cited above), nicotinamide riboside attenuated several of the devastating consequences of this disease. Genetically diseased and healthy mice were given 400 mg/kg/day NR or control chow diet, prior to disease manifestation to test its preventive capacity, and after disease manifestation to test whether it could halt disease progression. After 16 weeks of treatment with NR, the diseased mice showed improved biochemistry in muscle fibers, increased mitochondrial mass, normalized mitochondrial structure (dense cristae and matrices), and enhanced ATP production. NR significantly delayed the progression of the disease in both its early and advanced stages.24

In the above study NR increased NAD+, which in turn increased SIRT1 and SIRT3 activity in NAD+-accumulating tissues – muscle, liver, and brown adipose. Up-regulation of these two sirtuins has positive implications for metabolic syndrome. The authors speculated that increased NR-stimulated SIRT1 activity in the liver might be the mechanism behind lowered cholesterol.7

Another group of researchers investigated the effect of decreased SIRT3 activity on the development of metabolic syndrome. They found that feeding mice with a high-fat diet resulted in the down-regulation of SIRT3 activity. In addition, mice lacking SIRT3, when placed on a high-fat diet, experienced acceleration of obesity, insulin resistance, hyperlipidemia, and fatty liver. These same researchers found a correlation between a genetic polymorphism in humans that decreases SIRT3 activity and increased risk of developing metabolic syndrome. Their research uncovered a single nucleotide polymorphism (SNP) in SIRT3 that was associated with an increased risk for metabolic syndrome in a group of Caucasians with fatty liver.25

As discussed above, Nampt is the rate-limiting enzyme in the pathway from nicotinamide to nicotinamide mononucleotide (NMN) and on to NAD+. A group of researchers at Washington University School of Medicine (St. Louis, Missouri) found that synthesis of NAD+ via Nampt is severely compromised by a high-fat diet. If this step is bypassed, however, by direct application of nicotinamide mononucleotide, then NAD+ levels are restored along with improved glucose tolerance, enhanced hepatic insulin sensitivity, and decreased inflammation and oxidative stress, all mediated by SIRT1.28 Because nicotinamide riboside bypasses the rate-limiting and high-fat diet depleted enzyme Nampt, it would appear to be a likely candidate for supplementation to improve insulin sensitivity. As noted above, NR increases NAD+ levels more effectively than niacin, niacinamide, or NMN.6

6. Chi Y, Sauve A. Nicotinamide riboside, a trace nutrient in foods, is a vitamin B3 with effects on energy metabolism and neuroprotection. Curr Opin Clin Nutr Metab Care 2013;16:657-661.