Vegetarian vs Paleo: A Fitness Trainer's Hunt for Perfect Health

In every area of life, there are people that we look to as role models. The role models of the fitness world are the personal trainers and fitness coaches. They have already made it. They are shining examples of perfect health and life balance. They have it all figured out, or so we assume.

But, fitness trainers are human, too. They may have most of the puzzle pieces together, but if just one or two pieces are missing, they feel it. They know that something isn't quite right.

This is precisely where Kimi found herself in 2013. She had just become a full-time trainer at a fitness and weight loss boot camp. As a trainer, she followed a strict exercise regimen and an ultra-clean vegetarian diet. But in spite of her good eating habits and workouts, she wasn't happy with her body. Something felt wrong.

First thing she noticed were the mood swings. Irritability surfaced when she least expected it. She had less and less control over negative emotions.

Next came the lack of energy. In a job where she constantly needed optimum energy and vitality, her shrinking energy stores left her feeling anxious and tired.

Frustrated and weary, Kimi finally contacted Nourish Balance Thrive to find out what she was missing. To find the gaps in her fitness puzzle, I recommended an Adrenal Stress Profile. Kimi's physically strenuous job and hectic schedule tipped me off that stress might be the key to her body's negative responses. Sure enough, her cortisol was at 15 points, when it should have been 35 or so. Her DHEA levels should have been around 8, 9, or 10, but instead they were incredibly low at 1.7.

Over and over again, I find that health problems date back to a stressful time of life. In Kimi's case, her divorce two years prior had affected her emotional well-being, which took a physical toll. Around the same time as the divorce, she started a new job. Her symptoms ramped up when she became a full-time trainer, taking over some early morning classes at the boot camp while increasing her own personal training. Her schedule consisted of rising at 3:30 a.m., doing jiu jitsu and kickboxing, training for marathons, conducting sessions at the boot camp, teaching classes at a local university and finally dragging herself home at 7:00 p.m. Kim said, "I tend to over-give," and I had to agree.

For Kimi, a major factor in her recovery was recognizing the stressors in her life and taking steps to relieve some of that tension. I recommended cutting a few things out of her schedule, taking time to meditate and relax and being careful not to overtrain.

Many of the dietary changes that I recommend were already a part of Kimi's life. She ate very little—if any—gluten and processed sugars. "That's why my symptoms were so frustrating," she told me. "It wasn't as if I was eating at McDonald's and then wondering why I felt bad. I have always been a conscious, clean eater."

Kimi knew some clients at the boot camp had similar issues. In spite of traditional healthy diets, these women struggled to lose extra pounds and feel good in their own bodies. "When I contacted Nourish Balance Thrive, I hoped to find some tips for these women as well as for myself", Kimi said.

After a consultation and some testing, I created a protocol for Kimi. She had tried taking some supplements on her own, without any real guidance. I recommended some new supplements, and she began taking them regularly. In addition, I suggested she follow a Paleo diet, which meant re-introducing meat into her meals.

"That was the biggest shift I made," Kimi said. "I have been a vegetarian since high school, and I was a vegan for a while. To start this new Paleo diet, I had to recalibrate, open my mind and expand my view of food. Now I feel healthier. I'm grateful that I have been able to experience all these different diets and food paths, but I'm especially glad to have found one that works for me now." With the addition of pastured raised organic meat and the elimination of processed soy products, Kimi has more energy. "I am nourishing my body better than I have in the past," she admits.

Next, I asked Kimi to think about her stress levels. Being hard-working and action-oriented is a good thing, but when taken to the extreme, it messes with the body's equilibrium. The "fight or flight" response kicks in, and the body acts like it is constantly under threat. Kimi worked on identifying her stress triggers, eliminating some sources of stress and setting boundaries for herself. A better work-life balance allowed her body to relax a little, helping those hormones to return to normal levels.

After we put in those missing puzzle pieces—supplements, diet changes and stress management—Kimi began to feel better. She persisted with the protocol through the first two weeks of adjustment and kept up with it as her body began to respond. Her aggravating mood swings lessened, and PMS symptoms (like cramping) disappeared. Because of the supplements, her progesterone levels remained high enough throughout the months to eliminate those PMS issues. The slight inflammation in her joints that plagued her from time to time also disappeared. Once a month, Kimi used to struggle with painful cystic acne, but as she enacted the protocol, that problem vanished as well.

At the same time, her energy levels soared. "My energy is boundless these days," Kimi says. "I wouldn't trade that feeling of limitless productivity and capability for the brain fog of overtraining and over-dieting."

Kimi recognizes that her body is healthier than ever. Her anxiety about the fat-to-muscle ratio has waned, and she recognizes that she was creating unrealistic expectations for herself.

Kimi's dedication to the program and her strict adherence to my recommendations helped her to see results more quickly. "I love my job, and now I have the energy that I need to do it," she says. "I'm grateful to have a career that constantly pushes me, that prompts me to discover new ways to live a healthier life."

Kimi mentioned me and one of my recommendations (Headspace) over on her blog.

If Kimi's story is a reflection of your own, get in touch with me at Nourish Balance Thrive. We'll find those missing pieces to complete the picture and get you to that place of optimal health and fitness. 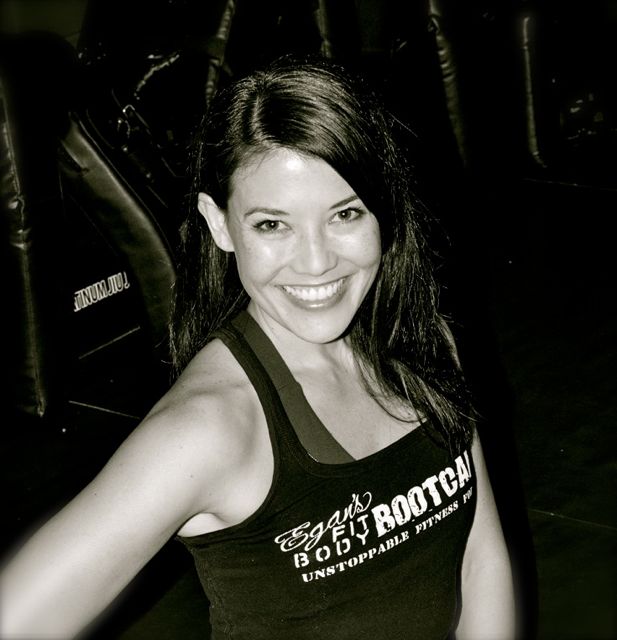