How to Get to Know Your Microbiome

Summary: I've just finished building a website that generates a phylogenetic tree in a PDF document from the results of your µBiome data. A tree makes it easier to understand the structure of the data and opens up the possibility of automating analysis. 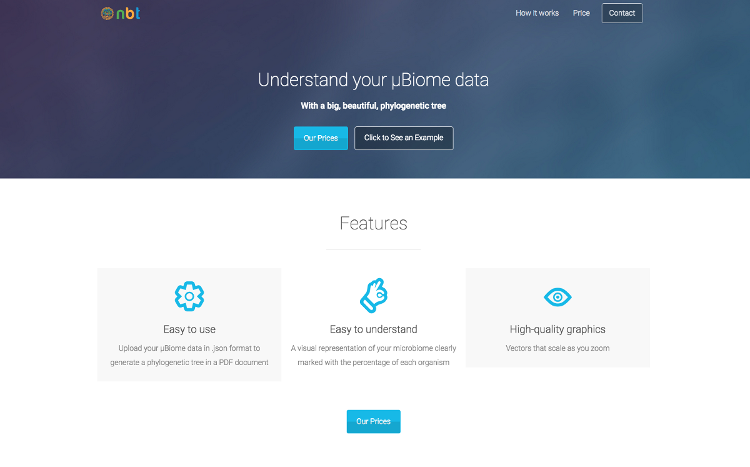 Three years ago I enjoyed a remarkable improvement in my health and athletic performance through the Paleo diet and functional medicine. Then 18 months ago I quit my job as a computer programmer at a quantitative hedge fund. Since then, I've been enjoying tremendous job satisfaction working full time to help other athletes achieve maximal health, longevity and performance using saliva, stool, urine and blood testing. The tests I use at Nourish Balance Thrive are powerful tools, but sometimes I can't help wondering about how primitive they will appear looking back in ten year's time.

I recommend a stool test to nearly everyone I work with as GI issues are not always strongly associated with other symptoms or lackluster performance. If you're going to do just one stool test, make it the BioHealth 401H GI Pathogen Screen. I don't know what exactly is going on at that lab, but for some reason their microbiologists are finding more infections than any other. I've seen hundreds of results now, and nearly half of them were positive for some chronic infection such as Giardia, Cryptosporidium or H. Pylori. In my experience, it's rare for someone not to improve after treating one of these infections.

Our guts are home to upwards of 100 billion bacteria per gram of content, with most of them preferring to live without oxygen. Unfortunately, the BioHealth test is starting to look dated in terms of its ability to classify and quantify these microbes, and the result shows only a single species able to live with oxygen.

Clearly our understanding these microbes is far from complete, but the evidence is mounting that some are good guys, and some are bad guys, especially when you consider the relative quantities. PCR DNA analysis is new to clinical stool testing and makes it possible to classify bacteria all the way down to the genus level while filtering out any human genetic material.

PCR DNA analysis was helpful for me when it found a pinworm back in 2013, but, unfortunately, that test went away when Genova Diagnostics bought Metametrix Labs. For a time, I was using its successor, the GI Effects® Comprehensive Profile, but eventually stopped due to the cost (list price $2,499).

Now there's a new kid in town, and it's called µBiome. At $87 (with affiliate discount), it's a bargain compared to any of the Genova tests past or present. Admittedly the single swab is unlikely to be as accurate as Genova's multi-day sampling, but still, it's an awful lot cheaper. The main problem I see is with the way µBiome report the results, which I would describe as heavy on graphics and light on semantics. To their credit, µBiome make the full taxonomy data available for export in a portable format and being a computer programmer I couldn't resist the temptation to play. 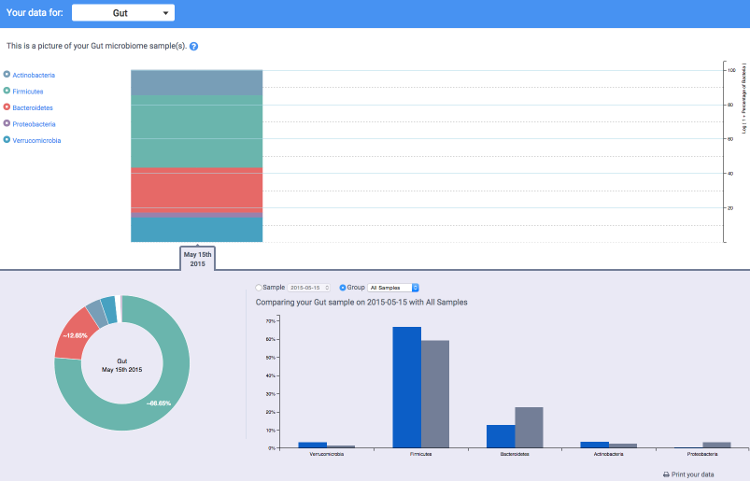 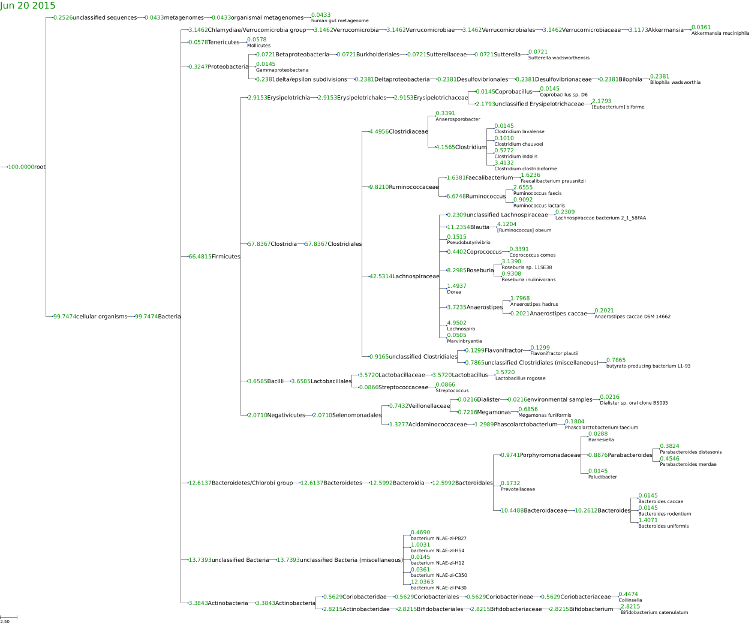 I'm wondering, is it the 23andMe situation again? I'm sure that µBiome know the clinical significance of their data but won't report it for fear of the wrath of the FDA. Perhaps someone reading here knows and could fill me in. I'll be sure to ask Jessica Richman, CEO of µBiome when I interview her for my podcast next month.

I knew I was onto something interesting shortly after sending Dr. Grace Liu of The Gut Institute µBiome data in a phylogenetic tree. The reply came back within minutes with the subject line:

Several requests for data in "tree format" followed soon after. A day earlier I had never heard of a phylogenetic tree, now I see them everywhere, even in tattoo form. My discovery was made by chance when I did a Google search for a Python (programming language) library that would provide a good tree data structure. The library is called ETE.

Now anyone can generate a detailed, scalable, phylogenetic tree annotated with percentage quantities and encapsulated in PDF format using the new website I've built. It's not quite free, but I thought people wouldn't mind paying me to do the development and host the site. My intention is to spark an interest in citizen scientists, and further our understanding of the human gut microbiome.

Take this example from my daughter, now 20 months old. She was born vaginally and breastfed. No antibiotics, never been sick, not even a nappy rash. No grains, no dairy (other than breastmilk), no legumes, no corn, no soy, no added sugar. She eats exactly as my wife, and I do; Strict Paleo with a focus on organic vegetables, grass-fed meat, healthy fats and a little fruit. If this sounds totalitarian, please rest assured that it's not, our whole extended family eats much the same way. For us, it's just food.

Points of interest from Ivy's sample:

Hat's off to Dr. Liu for taking the time to educate me on what to look for in this huge dataset. For a while, I was starting to doubt her claims of the importance of these bacteria simply because I had never seen them in practice.

Now over to you. Have you done the µBiome test? Did you find any of the good guys? Should I try and automate the analysis of these data? What other features would you like to see implemented? Please drop me a line and let me know.