The Tea That Mimics the Effects of Exercise 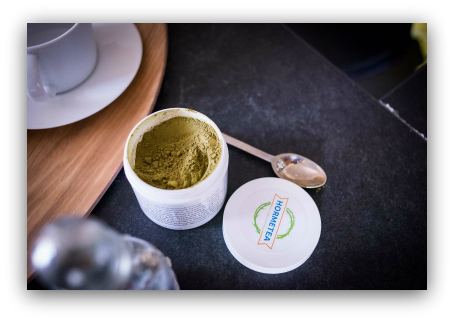 In the 1950’s a scientist by the name of Denham Harman first proposed the Free Radical Theory of Aging [1]. The basic premise of the theory was that metabolic processes produce reactive byproducts that accumulate over time, damaging cells, and ultimately leading to aging and its associated diseases. Naturally, scientists attempted to mitigate the production of these reactive oxygen species, in hopes of coming one step closer to slowing the aging process. However, over many years it became apparent that these supposedly damaging metabolic byproducts actually function as very important signaling molecules. In fact, the benefits we get from things like exercise and drinking Hormetea are dependent on them! Needless to say, fast forward a few decades and today the simplistic theory has been debunked and we know that there is a Goldilocks zone for free radicals - we require some, but too many can wreak metabolic havoc.

What is hormesis and why should we care?

Hormesis is the process whereby exposure to small amounts of a toxin or stressor has a physiological net benefit over time. Examples of hormetic stressors include exercise, temperature extremes, diets rich in colorful fruits and vegetables, and altitude-induced hypoxia. All of these temporarily stress the body in such a way that tells our cells to become stronger so that the body can better handle the stressor the next time around.

The Nrf2 pathway is our cell’s master antioxidant defense pathway and is activated by many kinds of oxidative stress. The pathway regulates expression of specific antioxidant and detoxification proteins that are critical to cellular health [2]. Activation of the Nrf2 pathway provides protection against many of the environmental insults we experience on a day to day basis. Some of the compounds in plants that we think of as antioxidants are actually pro-oxidants and function to enhance activation of the Nrf2 pathway.

AMPK and SIRT1 (a protein in the sirtuin family) are two additional signaling molecules that when activated enhance mitochondrial function. Both of these molecules sense cellular energy homeostasis and nutrient balance, most notably in the context of calorie restriction and exercise. However, hormetic phytochemicals in plants such as polyphenols have also been shown to increase their activity [3]. 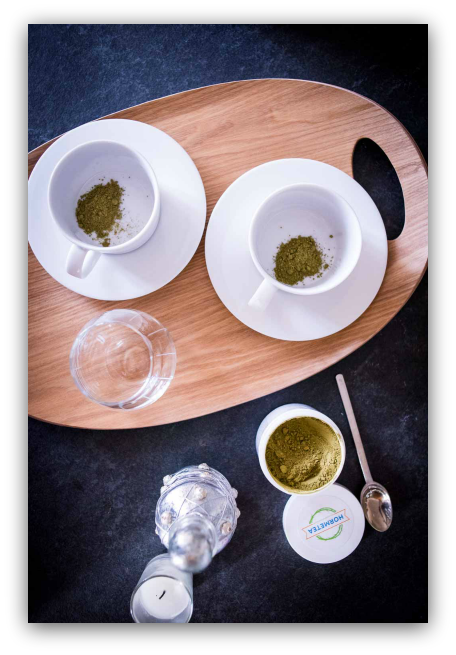 Polyphenols, flavanoids, and sulforaphane. Oh My!

Before we talk about the creation of Hormetea, let’s make we’re all on the same page with some definitions:

Hormetea was created by Tommy to be a convenient (and delicious) way to get a variety of these health-promoting compounds in one place. In one serving, you’ll find the best-researched plant polyphenols in doses that have been clinically-proven to reduce inflammation and improve metabolic health, with a touch of pepper to increase bioavailability. You can think of drinking Hormetea as a little intracellular workout. We’re sure you’re going to love it!

For the remainder of the article, we’ll dive into each of the ingredients in Hormetea and review the wide range of benefits each has to offer. Then we’ll discuss the best preparation techniques and answer a few of the most frequently asked questions.

Bilberry is a dark, Nordic wild blueberry that is rich in anthocyanins and quercetin. Bilberry has been shown to:

The predominant polyphenols in green tea are called catechins, the most potent and well-known of which is EGCG. Matcha differs from regular green tea in that it is shade-grown and its leaves are ground into a fine powder after harvest. Because the whole tea leaves are consumed, Matcha is even higher in caffeine and catechins compared to standard green tea. The catechins found in green tea and Matcha have been shown to:

Interestingly, there is some evidence of synergy between different polyphenols. For example, quercetin increases the bioavailability of EGCG [13] - another reason to consume these compounds together in Hormetea!

Turmeric is a bright orange root, similar to ginger. Curcumin, the most bioactive constituent in turmeric, makes up about 1-5% of the root and has potent anti-inflammatory properties [17]. Many of the benefits of turmeric have been contributed to curcumin in isolated form, so if you’re looking for something that will act as a systemic anti-inflammatory, best use a product such as [18]. Turmeric has been shown to:

Broccoli seeds have some exciting health-promoting properties due to their high concentration of sulforaphane, a compound found in lesser amounts in other cruciferous vegetables. Many epidemiological studies have shown decreased cancer [23] and all-cause mortality [24] in people who consume lots of cruciferous vegetables, which may in part be due to higher intake of sulforaphane. If you’re eating lots of cruciferous plants on a daily basis, make sure you’re also getting enough dietary iodine from fish and seaweed, since cruciferous vegetables may be linked to thyroid cancer in those who are already iodine deficient [25]. Many of the benefits of sulforaphane are likely due to its ability to activate the Nrf2 pathway. Broccoli sprouts, or their extracts, have been shown to:

That’s it for the ingredients. Check out the vibrant colors (compliments of the polyphenol content of these plant compounds) in the picture capturing the process of making Hormetea! 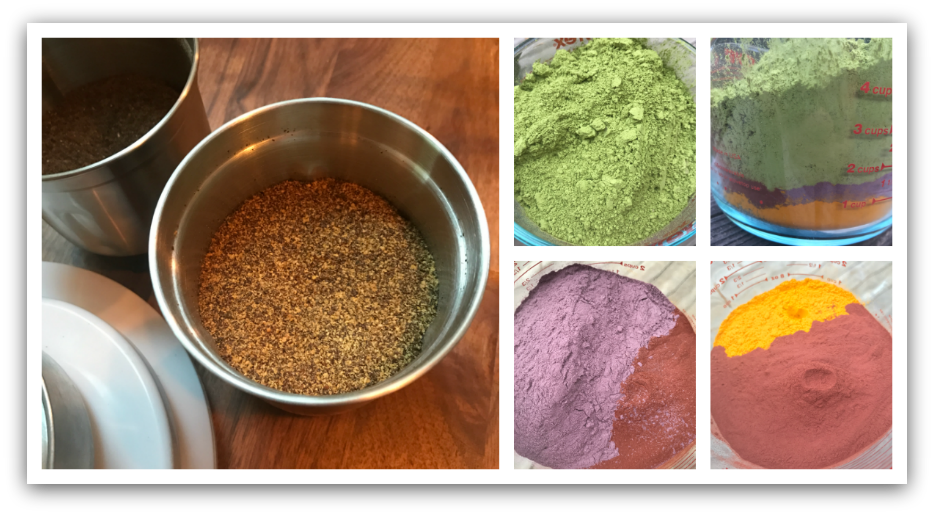 While you could just boil a kettle of water to prepare Hormetea, we don’t recommend it! There’s no need to get fancy with a thermometer, but following a few simple guidelines will allow you to maximize the activity of the health-promoting compounds in the tea.

* Or, boil a kettle and let it sit for a few minutes before pouring

Julie Kelly also came up with the brilliant (and rather tasty) idea of adding Hormetea to bone broth. As Chris stated in a recent podcast, “It tastes like a [savory] green pea soup.”

The science behind the preparation

We’re not trying to be neurotic with water temperatures… There is some logic behind the preparation method! Optimal matcha tea brewing temperatures are between 80-85 degrees Celsius (176-185 degrees Fahrenheit). Myrosinase, the enzyme in broccoli seeds that creates sulforaphane, is activated between 70-80 degrees Celsius (158-176 degrees Fahrenheit) [31]. So, to protect the matcha leaves from becoming bitter and optimize sulforaphane production, we recommend using the multi-step process above with the water around 70 degrees Celsius.

Now for some frequently asked questions about Hormetea.

Who will benefit from Hormetea?

Everyone! The polyphenols in Hormetea can benefit just about everybody, from individuals with metabolic derangement to hard-changing athletes to the average Joe on the street. Some of the compounds may particularly therapeutic for certain metabolic conditions, but anyone looking to optimize their health can reap the benefits of Hormetea.

Is Hormetea a good pre-workout drink?

Sure! A full 2 teaspoon serving of Hormetea will have about 60mg of caffeine, so while caffeine tolerant folks might not notice it, those who are caffeine naive or very sensitive likely will. Most people won’t get an ergogenic benefit per se, but many of the compounds in the tea target the same signaling pathways as exercise [32], so combining the two might yield a nice synergistic effect.

For those savvy folks thinking, haven’t supplemental antioxidants been shown to blunt adaptations to training? [33], there probably isn’t any need to worry. Most of the literature suggesting a negative effect of antioxidants on exercise adaptations used supraphysiologic doses of vitamin C, vitamin E, ALA, and/or NAC - all of which scavenge reactive oxygen species, which is the likely mechanism behind blunting exercise adaptations. Polyphenols on the other hand, act as intracellular stressors and upregulate endogenous production of antioxidants. For this reason, any negative interaction between training and the polyphenols in Hormetea is very unlikely.

How can I maximize absorption of the polyphenols?

Adding a bit of fat will maximize the absorption of the polyphenols in Hormetea. We recommend 1-3 teaspoons of coconut milk,coconut oil, PHAT FIBRE, MCT oil, heavy cream, etc. 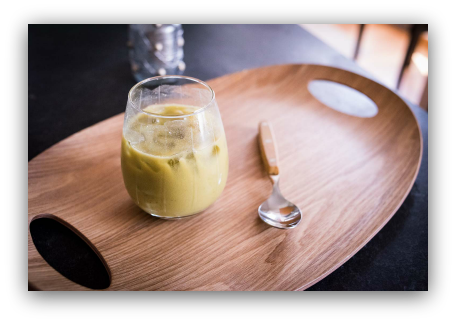 The weather is getting warmer… how do I prepare a cold version of Hormetea?

To maximize sulforaphane, make Hormetea hot, using the method described above. Then chill to make your cold beverage. Here is a recipe created by Toréa Rodriguez for a Hormetea frappuccino that trumps anything you could buy at Starbucks:

1 or 2 dates, or 1" of frozen banana for desired sweetness level.

Place all ingredients into a high-powered blender. Blend on high for a few minutes to desired consistency.

We encourage people to expose themselves to a variety of hormetic stressors and recognize that capturing all the benefits of exercise in a pill (or tea) is impossible. So keep taking those cold showers, using the sauna, challenging yourself with metabolically-demanding exercise, and getting a bit of color in the summer months. Additionally, you can now drink Hormetea to reap the benefits of not too few, not too many, but a healthy amount of those reactive oxygen species that help create a more resilient human.

You can buy Hormetea here. We’d love to hear what you think of it, so please leave your thoughts in the comments section below!