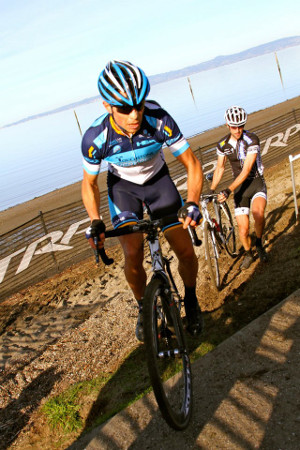 Cyclocross is fantastic fun, but as a slow-twitch dominant athlete I've never had great results. The races are usually 45 or 60 minutes in duration and despite the appearance of a time trial, the large number of corners make cross a series of short sprints. About two years ago I realised that I could somewhat overcome my inability to sprint by using a mountain bike as the wider tyres allow me maintain a higher corner speed. I don't take part in UCI races (which prohibit the use of wide tyres) but still, I would rather race a cross bike if only to avoid the heckling.

This year my goal is to suck less while riding a cross bike. Improving my ability to sprint will be key and in an attempt to achieve this I'm conducting a N=1 experiment after a suggestion by my regular podcast guest, Dr Tommy Wood.

Creatine is one of the most well-studied supplements shown to have an ergogenic effect [1] and assists in the body’s ability to perform a high-intensity exercise. Your body naturally produces creatine from the amino acids glycine and arginine, and some may also come from food if you eat meat. Making creatine is one of the most methyl donor intensive processes that takes place within the body [2]. As an athlete with poor methylation status, I'm excited to find out what happens when I supplement with 5g of creatine daily.

In addition to taking creatine, I will also be supplementing with 3g per day of beta-alanine. Fewer studies exist for this naturally occurring beta-amino acid, but if you need to sprint repeatedly or at the end of a long-haul, you see benefit [3-5]. Beta-alanine works by increasing muscle levels of the antioxidant carnosine, the muscles first line of defence against the buildup of hydrogen ions during high-intensity exercise.

To test the effect of the supplements, I will perform one test per week for the next four weeks. The test consists of a warm up followed by five one minute all out efforts with three minutes of rest in between.

Here's my first of results. Try not to laugh, 500 watts is the most power I've averaged over one minute since 2013. Today I started the supplements, next week, more data.