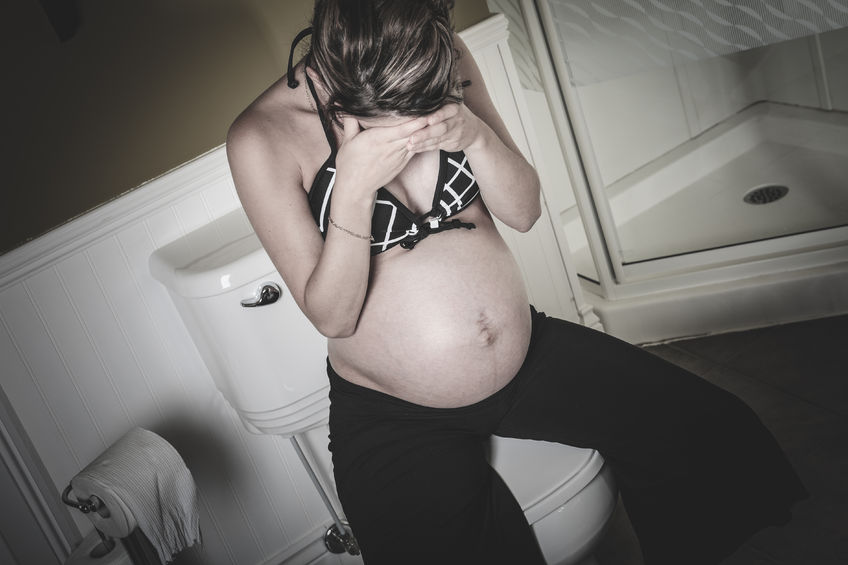 At week 8, I awoke to a certain kind of hell. As I lay spinning in bed, trying to work up the energy to get up and start the day, I was flooded with overwhelming nausea.  Everything smelled wretched. Suddenly, I could smell anything with a scent within a 10 mile radius. Whatever my dear husband had made for breakfast was suffocating me. When he came in the room, to sweetly wake me up, I could smell onions on his breath and what I can only describe as moldy compost emanating from the kitchen. I shouted at him to open the windows and close the door.

I wish I could say this was a rare occurrence during my pregnancy, unfortunately it lasted for 16 weeks. It also wasn’t just morning sickness. It was random, persistent, and any time of day sickness. Nausea, extreme food aversion, very specific food cravings, and total sensitivity to odors of all kinds. Not to mention the standard fatigue of pregnancy.

Anyone who has experienced any kind of “morning” sickness knows how awful it is, especially if it is constant and unrelenting. Combine that with the fatigue and tiredness that is common to many women during pregnancy and you’ve got a one-two punch that can take you down for the entire nine months.

Have you ever wondered if there’s anything you could do leading up to and during pregnancy might make a difference in those symptoms, or even eliminate them entirely? I certainly did, and I want to figure it out before I consider having another baby. Luckily, I had the fortune of meeting Chloe Archard who just so happened to be well on her way to answering this question for me.

Chloe is the co-founder of Paleo Britain and host of the Eat Better Podcast. She’s also a mother of two with one more on the way later this Fall! Her experience as a mom and her background in biochemistry make her a great resource in this morning sickness research and experimentation.

When Chloe was pregnant with her first child, she was not eating a Paleo diet. What she did eat most would consider fairly healthy; always whole foods but plenty of grains and refined carbs. Chloe didn’t adopt the Paleo diet and lifestyle until after her second child was born. And both of her first two pregnancies were exactly as described in the first paragraph.

During her first two pregnancies (pre-Paleo) Chloe experienced intense morning sickness. In her own words, it was “all day long,” and she simply couldn’t eat much in the way of truly healthy, nutrient-dense foods without becoming violently sick. As a result, she mainly ate refined carbohydrates and had to snack every 1 to 2 hours to keep her energy up.

Chloe also experienced an extreme tiredness during the day, most days. She was “dragging around” all day long during her second pregnancy, when she already had one child to care for, this made it incredibly difficult to live any kind of normal life.

When she and her husband decided to try for baby number three, Chloe was determined to try to avoid morning sickness. Chloe had already been eating a primarily Paleo diet for 18 months prior to trying to conceive. She researched what others had done to mitigate or prevent morning sickness and tiredness during pregnancy. She was particularly interested in how nutrient dense foods could make a difference. She decided to implement the following changes to her already- healthy diet:

#4 Cod liver oil. Here in the US, I prefer the Nordic Naturals unflavoured liquid oil. It’s odorless and tasteless--you’ll never notice a teaspoon on your salad.

While Chloe still experienced some morning sickness with baby number three, this time it was only in the evenings, which was a huge improvement from the first two pregnancies. The extreme lethargy and tiredness during the day was entirely absent.  What morning sickness Chloe did experience eased significantly around the 10th week of her pregnancy. (In her other two pregnancies both lasted for at least 12 weeks). Chloe believes that all the changes she made significantly contributed to the different experience she had during her third pregnancy.

Considering the dramatic impact morning sickness and tiredness can have on your life during pregnancy, isn’t it worth it to try anything you can do ease those symptoms? And isn’t it even more important when those changes can provide a nutrient-dense start to your baby’s life? I know I’ll be making these changes pronto. If and when we do have another baby, I’d like to not spend the first three months shouting at my dear stinky husband!

You can read Chloe’s detailed account of her “experiment” which includes some additional details at her blog on the Paleo Britain site. You can also listen to my interview with Chloe on the Paleo Baby Podcast.