Does Bike Racing Cause Low Cortisol?

Cortisol: the king of hormones. No other hormone has the ability to liquidate your assets in the presence of danger quite like cortisol. For bike racers like me, the danger is self-imposed and takes the form of a whistle and the start of the race, and cortisol is part of the stress response that mobilises my fat, carbohydrate and even protein for use as energy as I make the mad dash for the first corner.

In 2014, the MPCC prevented defending champion Chris Horner from starting the Vuelta a España due to low levels of cortisol. Does too much bike racing lead to a depletion of cortisol and the constellation of signs and symptoms commonly known as adrenal fatigue? In addition to bike racing, I eat a low-carb, ketogenic diet, something that has also been accused of being “stressful”. Perhaps the two together are the perfect storm for low cortisol.

Over the past few years, I’ve done a couple of saliva tests that measure cortisol. I’ve also seen the results of around 500 athletes, and they nearly always show low cortisol. The rare high cortisol exceptions were easily explainable, for example in people with post-traumatic stress disorder and type 1 diabetes.

The low cortisol finding in saliva has become so predictable that I question the utility of the test, so when I first heard about the Dried Urine Test for Comprehensive Hormones (DUTCH) that measured metabolites of cortisol I was very excited. The result on a saliva test shows the free fraction of hormone available to cells. Knowing the free fraction is important, but free cortisol only represents 1% of the total, so it’s only part of the story. My question has always been why? Why low free cortisol? The potential reasons broadly fall into three categories:

But what if the 500 athletes I tested had completely normal cortisol and there was a problem with the reference ranges on the test? That’s entirely possible and to some degree, I’m dependant on my experience and the experience of the doctors and scientists that trained me. I’m standing on the shoulders of giants like Mark Newman.

Mark Newman is an analytical chemist and the founder of Precision Analytical, the makers of the DUTCH. Mark is a wonderful educator and last week I got the chance to interview him for my podcast. In a former life at ZRT Laboratories, Mark had access to a database of around one million test results for his research purposes. Reference ranges on lab results can be problematic in general, often times because the range represents two standard deviations either side of the mean and so includes 99.7% of people that have done the test. The mean is just the average, and guess who the average person is? Someone who doesn’t feel good and is therefore motivated to do a test. The reference ranges for the DUTCH were set using a healthy cohort and Mark’s extensive experience.

How am I doing right now?

I feel great right now, better than at any time in my life. My energy levels are consistently high, and I sleep at least eight hours through the night without waking (unless my two-year-old monkey decides she’s going to jump on my head). I look forward to riding my bike, and I recover quickly. When I warm up my heart rate rises rapidly, and every weekend I’m able to maintain 93% of my maximum for a 60-minute cross race. The opposite of all of this was true when two years ago first I measured low free cortisol in saliva. Living with low cortisol is not fun.

Saliva tests require spitting into a tube, whereas the DUTCH is done using pee collected on filter paper. Not only does this allow me to answer some of the why questions above, it also makes sending the samples back to the lab incredibly inexpensive even for people living outside of the US. Each of the four samples are from timed collections, this allows me to know the cortisol pattern. 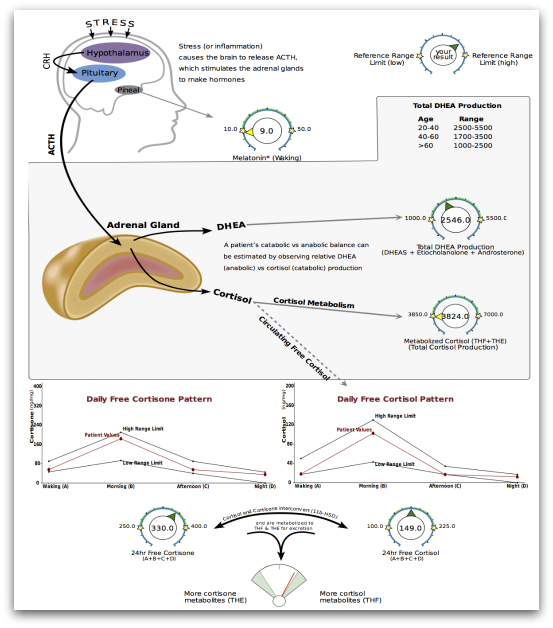 As you can see from the chart at the bottom of the image (larger PDF version), cortisol and cortisone follow a diurnal rhythm, peaking a couple of hours after you wake and reaching a nadir around bedtime. I took the first sample minutes after waking. Therefore, the first value on the chart is more indicative of overnight cortisol levels. Are you having trouble sleeping at night? Disrupted cortisol pattern might be something worth you investigating. Overall my cortisol pattern (and, therefore, my circadian rhythm) looks good apart from a slight nighttime elevation that I’m sure is related to my being unable to tear myself away from the computer and the scientific studies that Dr. Tommy Wood sends me each day. Thanks, Tommy!

Metabolised cortisol is the best marker for overall production.

If this result had been from saliva, we would have seen that the free cortisol was within range and that would be that. But with the DUTCH we can look at metabolised cortisol, this gives me a much better idea of my overall cortisol production rather than just the free 1% found in saliva. On my result, we see that total cortisol production is fairly low, right at the bottom of the reference range.

Could my adrenal army be running out of stress bullets?

I’m not sure I have the answer to that question, but I do note this result with interest given that last weekend I set a 90-second power record despite having ridden my bike only twice in the last three weeks.

More concerning to me is my sluggish cortisol metabolism, as indicated by normal levels of free cortisol despite there being low overall production. Sluggish cortisol metabolism helps me narrow down a list of possibilities into a list of probabilities. Poor liver function is a possibility, but I think that hypothyroidism is a probability[1] because when I look at my blood test results, I have elevated TSH and my free T3 is low.

That’s the $64,000 question. I don’t have any overt symptoms like weight gain, cold hands and feet, brain fog or constipation but my basal morning temperature is low unless I supplement with a glandular thyroid support supplement. Could my low-carb ketogenic diet be contributing to the hypothyroidism? I’m absolutely open to that possibility but my thyroid function has always been low, and even lower when I was eating a high-carb diet. I have tested for autoantibodies on several occasions and I’ve never found them.

Who should do this hormone test?

Everyone, even if it’s only to set a baseline. Say you feel great, I still think it’s useful to establish a baseline in case you run into trouble later.

Do you have some ideas for experiments I could do to answer your questions about cortisol? Do I have a surge of cortisol when the whistle blows at the start of the race? Mark has kindly provided me some tests at his cost so that I can do some experiments and write about what I find. Let me know your ideas in the comments section below.