A very interesting paper posted by the encyclopaedic Rhonda Patrick last week brought a few recent discussions at NBT full-circle. The study is a nice and succinct amalgamation of data from humans showing that endurance exercise produces a shift in the kynurenine pathway, resulting in more kynurenic acid (KYNA) and less quinolinic acid (QUIN).1 The authors say that this has important implications in depression, where exercise has multiple proven benefits, because QUIN is neurotoxic and associated with the neuroinflammation often seen in depression, whereas KYNA is more neuroprotective.

If all of that sounds like a random sciencey word generator, let’s step back and mention that these are all metabolites of the amino acid tryptophan (TRP). It’s thought that about 95% of TRP goes down the kynurenine pathway with the end product of NAD+. It looks a little something like this: 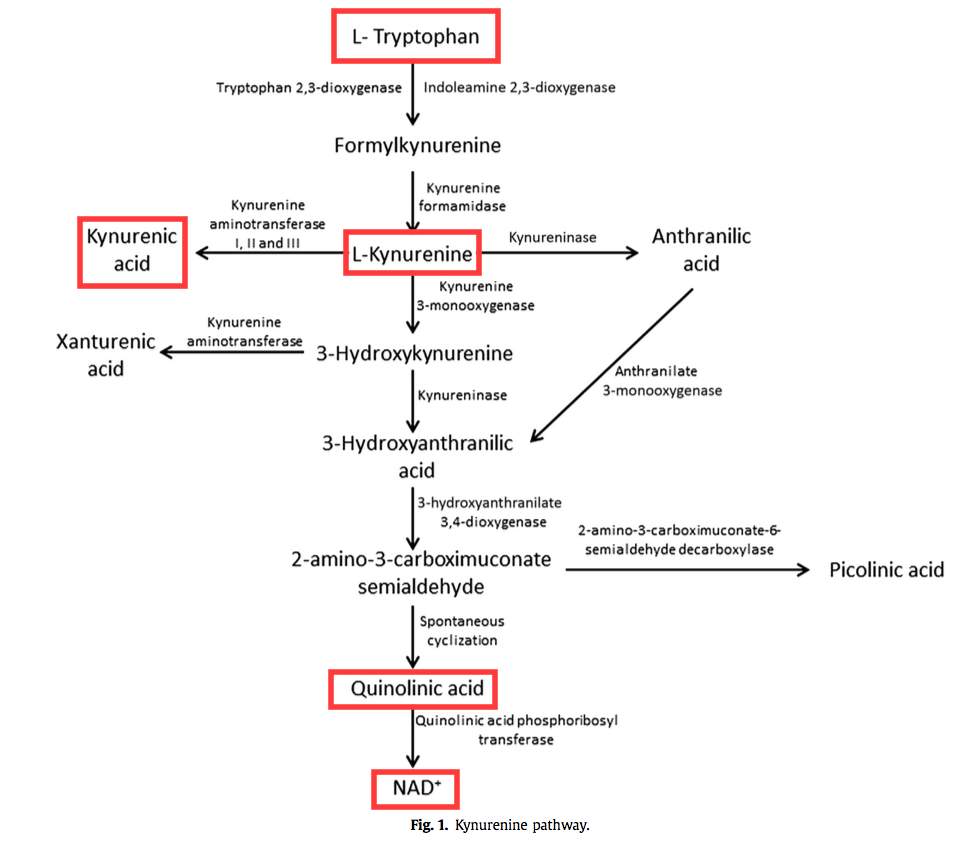 The kynurenine pathway has been the focus of a lot of recent research into neurological diseases because of the fact that QUIN can act as an “excitotoxin” at glutamate receptors, and is associated with neuroinflammation. Enzymes in the first step of the kynurenine pathway are also upregulated during (neuro)inflammation,2 which has made the pathway a potential target for pharmacological intervention in neurological diseases. As usual, if something is bad, the knee-jerk response seems to be to find ways to block it rather than understand why it happens.

When we do a urine organic acids (OAT) test with athletes at NBT, we can actually measure QUIN and KYNA to get an idea of the balance in this pathway in relation to the other major pathway of TRP metabolism, which produces serotonin (and then melatonin). Elevated QUIN is normally attributed to some degree of neuroinflammation. The standard response might therefore be to recommend some anti-inflammatory agents such as curcumin or N-acetylcysteine (NAC). But it’s important to remember two things:

The obvious thought would then be to ask “what does QUIN do?”, and this is exactly the question I got from Chris. As with most things in biology, some QUIN is good, but a lot of QUIN is bad. Though it could just be a necessary intermediate in NAD+ synthesis, QUIN does seem to have a function in regulating redox state in the cell, particularly through interactions with iron and the Fenton cycle.3 Perhaps it is then not surprising that the balance of metabolites in the kynurenine pathway is intimately linked to cellular redox state.4

The kynurenine pathway therefore becomes another reminder that pretty much everything in biology is driven by the movement of electrons. Though you may not realise it, any time somebody talks about redox state, mitochondrial function, oxidative stress and reactive oxygen species (ROS), or inflammation, they’re essentially talking about electrons being where you do (health) or don’t (disease) want them to be. And seeing as we love talking about insulin resistance, the function of the insulin receptor is also determined by ROS (none bad, some good, lots also bad).5,6 It’s not just about the carbz.

Coming back to QUIN, we see that the enzyme that metabolises the main step from QUIN to NAD+ (QPRTase) is inhibited by elevated oxygen levels, as well as an accumulation of metabolic intermediates, especially those from the Kreb’s cycle. When any of those go up, NAD+ production is slowed, and QUIN can accumulate:

In the cytoplasm of the cell, oxygen and Kreb’s cycle intermediates increase when the mitochondria stop working. Bringing together two branches of thought (i.e. the theories are good but some of it is still speculative), these increases in Kreb’s cycle intermediates and cytosolic oxygen may be part of a co-ordinated response. When something (i.e. a pathogen) is present in the body or in a cell, it often affects mitochondrial function, for instance by stealing a nutrient. As a result, certain intermediates in the Kreb’s cycle increase because the mitochondria become less able to take the electrons from NADH and FADH2 produced during metabolism. As a result, two things happen:

In this setting, high QUIN is a result of the cell diverting metabolic pathways away from NAD+ production while it deals with the invader. In the modern environment, certain toxic exposures that affect nutrient handling or inhibit mitochondrial function (i.e. phenolic pesticides that alter iron homeostasis) could also have the same effect, and induce this response without a pathogen in sight.9,10

Going back to the initial paper, it could therefore be that endurance exercise is helping to promote mitochondrial flux, which will increase oxygen usage in the mitochondria and reduce the accumulation of specific Kreb’s cycle intermediates as they get “used”. So a decrease in QUIN relative to KYNA after an endurance race may not (just) be due to less QUIN production. Removing the metabolic brakes will result in more QUIN continuing towards the production of NAD+.

Side step: This metabolic process reminded me of the popular supplement pyrroloquinoline quinone (PQQ), which has a number of potential functions, including modulation of cellular redox state.11 When healthy volunteers are given oral PQQ, overall urinary excretion of Kreb’s cycle intermediates decreases. Though it’s probably over-simplified in an attempt to sell expensive pills, this drop in accumulated intermediates is thought to be due to increased mitochondrial efficiency. In the same subjects, PQQ supplementation also reduced markers of inflammation (decreased CRP via a reduction in IL-6).

Tying this all together, it seems that inflammation, quinolonic acid, the kynurenine pathway, and production of NAD+ (one of the key regulatory molecules in metabolism) are all directly linked to healthy mitochondria in a happy cellular environment. This is almost certainly why low intracellular NAD+ (or a low NAD+/NADH ratio) is implicated in everything from aging to neurological and autoimmune diseases.12-14

As a result of this, there’s a big push to increase NAD+ with supplements, and we’ve recommended the NAD+ precursors niacin and nicotinamide riboside (NR) to certain clients to help them do that.15  However, this has two caveats:

As Bill Lagakos will tell you, NAD+ production and cycling is also directly linked to how well you look after your circadian biology.

In short, the words are complicated and the pathways are cool, but if you want to live a long life free of inflammation and insulin resistance, you need happy and healthy mitochondria, which means you need to fix your environment, both externally and internally.

*P.S. Creatine synthesis accounts for up to 70% of the use of methyl groups derived from S-adenosylmethionine (SAMe) in humans.18 I therefore have a theory that supplementing with creatine could help balance the demand placed on the methylation system that may occur during supplementation with NAD+ precursors.19 The issue of NAD+ precursors potentially putting a strain on the methylation system is probably also why Thorne have added trimethylglycine (TMG or betaine) to their new NR preparations.