The strange thing about complaints is they’re often only conspicuous in their retrospective absence. Once something has been going on for a while, it becomes the new norm. Our client knew something wasn’t right, but he couldn’t quite put his finger on it. When pressed, the response was (1) slow recovery from working out (2) fatigue and (3) occasional carb cravings.

The 205 consists of a series of saliva tests that measure the level of cortisol four times daily to establish its circadian rhythm. The test also includes an average of two DHEA readings, melatonin, progesterone, estradiol, estriol, and testosterone. 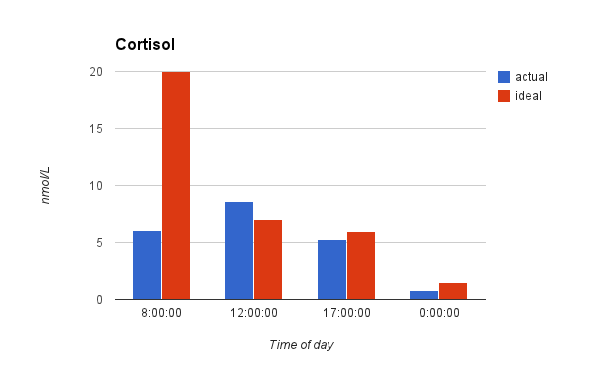 You can think of cortisol as units of energy, and like most things in physiology, you want just the right amount. Not too much, not too little. Although cortisol should be highest first thing in the morning, that doesn’t necessarily (and shouldn’t) mean that the morning is the most energetic time of day. Instead one should perceive a smooth and constant level of energy throughout the day followed by the rather sudden onset of tired within an hour or two of sunset.

Our client was waking up with just over a quarter of the level of energy that he should be experiencing. Mornings suck! What would you do if you woke up feeling like this? You’d reach for a stimulant, like coffee say. This might work well initially, but as we all know, we eventually become insensitive to the one-cup-jolt, and ever increasing doses are required to achieve the same effect. By noon and two or three cups later, our client’s perceived energy is back into the optimal range but unfortunately the caffeine did nothing to address the root cause of the low cortisol. As afternoon levels of energy dip, cravings set in and the only things that sound like a good idea are eating and sleeping, preferably in that order.

This kind of eating often leads to two things: (1) blood sugar disregulation and (2) overeating and weight gain. The first is a particularly insidious problem because it prevents sleep, and sleep is the one thing that really must happen in order to recover from a low cortisol problem. For most people blood sugar disregulation is felt most when blood glucose dips below 70mg/dL. When this happens the hormone adrenaline is secreted in order to bring blood sugar back up, below 60 and cortisol also gets involved. Why is this bad? These adrenal hormones are stimulating in nature, making it almost impossible to get back to sleep at 2am once you’ve been woken by them. Wired and tired. Why does blood glucose dip so low? Because the overfull fat cells have been chronically overexposed to insulin and have downregulated their sensitivity to it. The pancreas responds by secreting more insulin and eventually overshoots leading to the low blood glucose. The one trick that might get you back to sleep is eating more food, as doing so often makes those lacking insulin sensitivity sleepy. Those full fat cells still can’t take on any more energy though, and weight gain is inevitable. 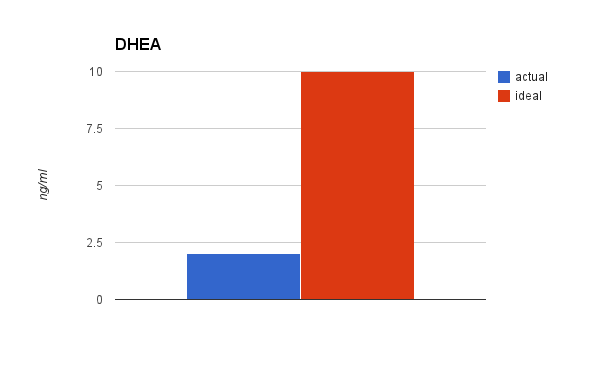 DHEA is the major precursor of testosterone and the estrogens. It promotes the growth and repair of protein tissue (especially muscle), and acts as a counter-regulatory agent to cortisol, negating many of the harmful effects of continued excess cortisol. When increased demand for cortisol is prolonged, DHEA levels decline. DHEA is then no longer able to balance the negative effects of excess cortisol and here we see our client has about one fifth of the optimal level.

Our client was typical in that he had already laid the foundation for recovery before coming to us for help, and the basic protocol was as follows:

The two adrenal support products used were sublingual drops, and they are absorbed with 99% efficiency. It’s common then for clients to feel better within days or even hours and that was the case here. Working with us is not like working with a conventional medical doctor, you can email at any time we’ll respond within hours. Over the following three months we communicated almost daily, and after three months we spent another hour on the phone discussing progress. Symptom reminiscing with happy clients is one of my favourite things to do. Needing a third or fourth cup of coffee and something sweet to make it through the afternoon is common but not normal. As is being able to sleep at any time of the day but not at night. Getting up at 2am for a spoonful of Nutella is not best practise either. Lucky for him, these things are now a thing of the past.

Our client had enjoyed continued and controlled weight loss and body composition improvement. Weighing is not required, it’s obvious just to look at him and to see how motivated he is to manage the new team kit order. You would be too if your cycling shorts were hanging off like that!

Recovery from training is now much quicker, and more importantly, it doesn’t take so much out of the rest of the day. Where previously spending the afternoon on the couch seemed like a good idea, now a nice gentle walk around the farmer’s market is fun. This is important not just for our client directly, but for his partner too.

Mood has also dramatically improved, which makes sense when you think about how little fun it is feeling fat and fatigued. We know we’re making progress when the client starts making jokes again.