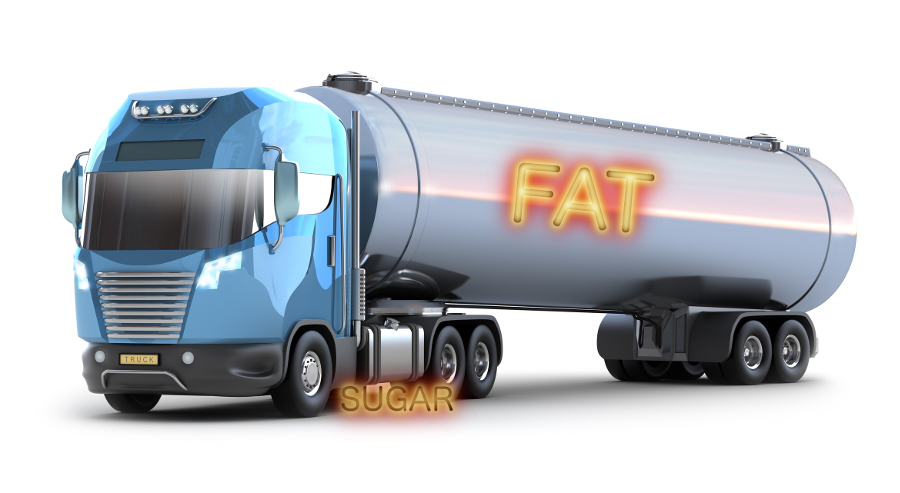 When I first began training seriously as an endurance athlete, I naturally came under the influence of the sports nutrition companies. It’s understandable. Their large marketing budgets are able to create big advertising and promotional campaigns, which newbies like me tend to notice and trust. Not to mention everywhere you look other athletes are popping gels like candy.

In those days, the sports nutrition companies were touting “high-carb” studies and what I read was very convincing. They said that carbohydrates where the body’s source of energy, so naturally I assumed that I needed more carbs to fuel my training and racing.

After quite some time literally eating that philosophy, I began to experience these four warning signs:

Over time I got to the point where I couldn’t go for longer than 40 minutes of training without consuming a gel. If I went any longer, I would get shaky, nauseous, weak... and beyond hungry.

My hunger became a distraction, and it made me angry, moody, irritable, and limited my life outside of training.

When I took the time to check my blood, I found four more disturbing signs:

If you don’t know how to check these markers, check out the clinical coaching programme I run with Dr. Tommy Wood.

That’s when reality hit me: I was winning Cat 1 mountain bike races but at the same time I was headed towards type two diabetes.

I was doing exactly as the sports nutrition companies advised but my body wasn’t handling it very well.  This is what everyone else was eating, this is what my coach told me to eat, what was going on?

The first had to do with those studies the sports nutrition companies cited to show that carbohydrate loading increases performance in endurance athletes.

There's a very serious problem with those studies.

The participants were all sugar burners.

Why does that make a difference? Here’s why:

Think of our bodies as machines that need fuel from which to get energy. But the human-machine is not like other machines, like your car, for example. Your car is (probably) only able to use one type of fuel.

But not the human machine. Humans are hybrids that burn whatever fuel we eat.

So - if you eat sugar, your body will burn sugar for fuel.

If you eat fat, your body will burn fat (and ketones) for fuel.

Given the availability of sugar, your body will burn it first because sugar is easy to metabolise and storage capacity is limited.

So if the people in the studies were sugar burners (like me), they naturally had to use carbs for fuel. Their body didn’t know any other way. Their body didn’t want any other way.
I began to see that my carb-loading diet was producing a dependence on sugars as my fuel source. That’s why I had to keep eating every forty minutes...to get more fuel. That explained my hunger. And my shakiness. And my nausea. And my weakness.

The discovery that made all the difference.

Think of a gas tanker. The truck itself runs on a small fuel tank just behind or underneath the cab. That’s like glycogen (stored sugar). But it’s a small tank. It will run out fairly quickly.

But the tanker trailer being pulled behind the truck contains lots more fuel (like fat in our bodies).

When the truck operates only on the fuel in the small tank (stored sugar), the tanker could run out of gas even when the trailer tank is still full of fuel (fat).

That illustration gave me clarity. I didn’t need more and more and more carbs to fuel my body and performance. I needed to tap into the fat my body was already naturally storing.

In order to tap into the body’s fat reserves, insulin levels have to be kept low. Insulin is a hormone stimulated by eating carbohydrate and so in order to return your body to it’s natural fat-burning state you must eat a diet containing less carbohydrate.

What did I do?

I made the switch, from carb-loading to a healthy-fat, low-carb ketogenic diet. The process took time, a few weeks to notice improvement, and probably two years to regain my full potential on the bike. The result: I restored my metabolism to it’s natural fat-burning state.

It’s still hard for me to believe the improvements I’ve seen as a result of making a simple dietary change and still don’t feel comfortable about how easily I forget my new normal:

If you are an endurance athlete, or any kind of athlete for that matter, and you’ve been on the carb-loading bandwagon, I bet you’ve experienced some or all of the symptoms I was experiencing before I made changes to my diet. What are you waiting for? Give the low-carb approach a month for your body to adapt. And what better time than the off-season? Worst case you go back to whatever you were doing before.

At this point, I should admit that I didn't make this dietary change unassisted. My wife Julia is a food scientist that rejected the traditional registered dietician route because she knew the rules she’d be forced to practice would hurt rather than help people like me. Julia now helps other high-performance athletes make the switch and return their bodies to the natural fat-burning state.

The process is simple: pick a real food, low-carb plan like The Real Meal Revolution. Go ahead and get started, all the shopping lists and meal plans are all there for you inside of the member's site. In the beginning, it's helpful to keep a record of everything you're eating in a food diary. Any diary will do, we like a simple Google Docs spreadsheet. That way, Julia can look over your shoulder and see what you're eating. Then she can make some helpful suggestions and answer your questions. Everyone has questions in the beginning, so click here to order coaching with Julia.